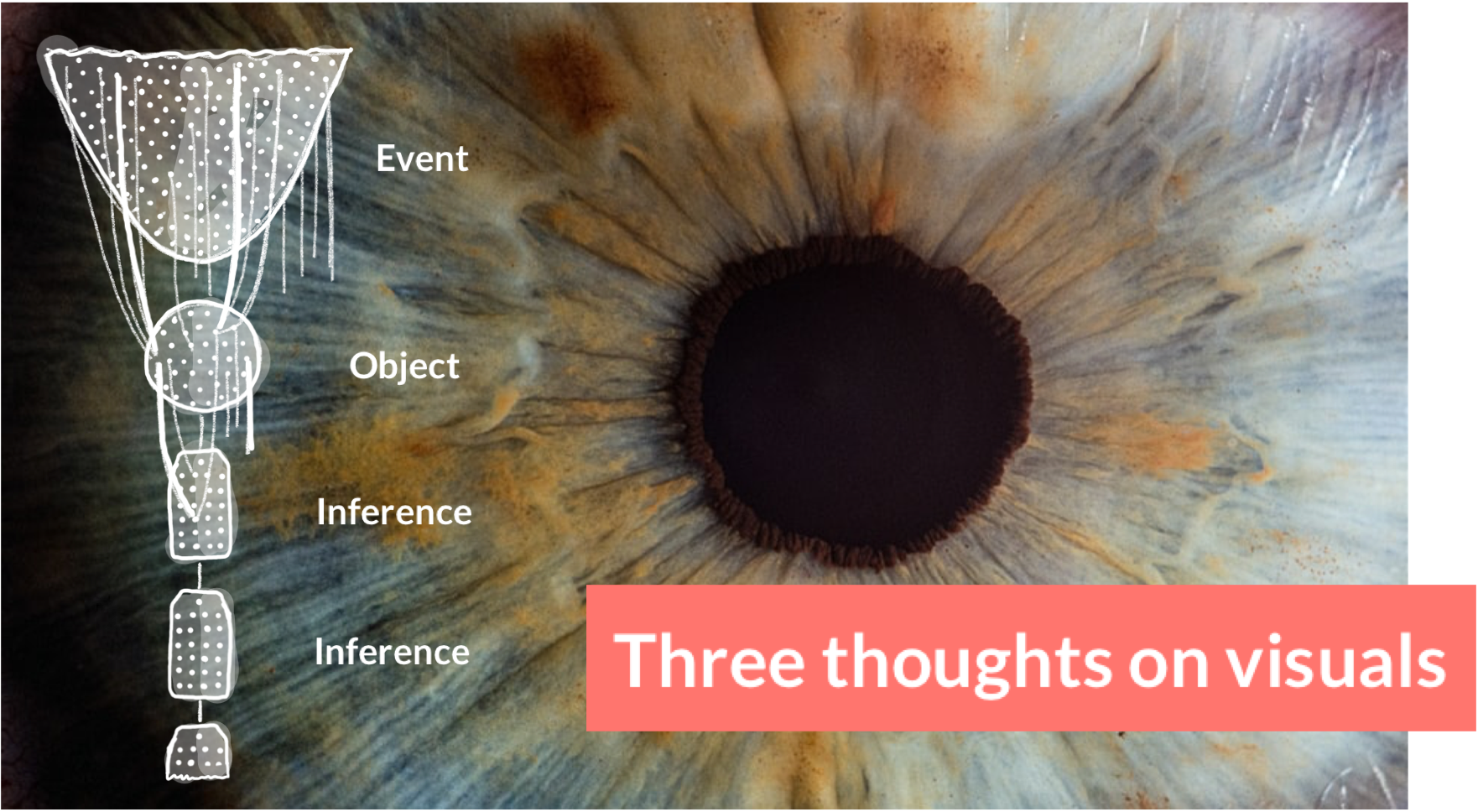 This article seeks to convey three ideas. It is no coincidence visuals are important in the process of binding people together. Musical performances can be a blueprint for group work.  And employing representations ‚sells’ abstract or novel ideas efficiently. Do they seem a little distant? Perhaps, at first glance.

Have you ever had that feeling of being at a loss for words when attempting to explain your idea on a conf call? This is the moment when, in a face-to-face setting, you would reach for a napkin to doodle your point out on. And it’s not just the conf call. There’s a variety of situations where visuals are crucial for understanding. With their help, some things just don’t need to be verbalized. Utilizing drawings is one of the most powerful ways of integrating information, making it more concise, convenient, comprehensive, and accessible. Let’s take a look at three great characteristics of visuals that are relevant across different contexts and situations.

A single picture can summarize a tremendous amount of information in an accessible way and transfer that information instantaneously, just as road signs do. Just imagine the mayhem if signs were suddenly replaced with 2-3 line-long descriptors! Starting with a symbol as the simplest form of a visual, the range of possibilities extends all the way to images capturing very complex thoughts, perhaps spanned across wall-size whiteboards during group thinking sessions.

In such circumstances, images become so important that their status becomes elevated. Visuals summing up a strategy or the solution to a problem are starting to be referred to as real-estate.

But it’s not only their content that makes them valuable, as the content represents solely the end goal of a process that a group of people participated in. The spirit of mutual endeavor is also encapsulated in the picture. A visual has the capacity to convey emotions easier than one would using language, unless of course endowed with a poet’s gift for words. The unifying aspect of depictions is as ancient as rock art, with its many authors over time adding new paintings to scenes of hunters and their prey. These are not the work of individual artists; rather, they are art created by many authors adding animal figures to the decorations over time, and the result somewhat resembles a cohort-organized bulletin board. These works were not designed as wholes, but were simply a way of depicting, and comprehending the world by subsequent groups that ended up united by time. Fast forward 40,000 years, and here we are — on a Zoom call with perfect strangers. Only now, we are using slides or whiteboard canvases with the same purposes in mind — bonding, achieving understanding, and getting things done. Visuals work to unite us around these goals.

We perceive our world by abstractions of the things we see. A single image may have several characteristics, but only some of them are necessary for us to recognize the symbol or item and connect it to data in our memory. Due to differences in perception, however, the set of attributes that works on me might be very different from the one that works on you, even if we were to gaze upon the exact same image* 1.

Each of us owns an experience in our own way, because what we make of what we see is, to some degree, a result of our past experiences. That is how a visual not only rings a bell, but actually rings different bells in different heads, allowing for multiple interpretations. This freedom of result is a binding force in and of itself.

Aligning for the harmony

Now let’s look at how visuals can be put to work during a joint session. The construction of visual representations in a dialogue can be regarded as a performance from the perspective of a spectator. Think of the process of conquering the demons of chaos in order to achieve clarity and understanding. Depending on the desired level of control, collaborative group whiteboarding can resemble either a jam session or a carefully orchestrated performance. In a jam session, a high degree of freedom is provided to participants so they have the ability to spontaneously build on each other’s input. Tinkering with sketches, drafts and ad-hoc created visuals are all encouraged, with little or no effort made to hinder the flow of creative juices. The result can vary from a brilliantly improvised result or, on occasion, to a magnificently chaotic cacophony. On the other end of the spectrum, the collaboration process is structured to such detail that contributors can indeed feel their input adding up to a performance of the same underlying score. It’s the facilitation process that directs the ensemble’s contributions toward a preconceived goal. Individual parts — drawings or visuals used in the process — usually reflect coherence on the macro level. Just as no musician would risk disturbing the harmony of an orchestra, so should collaboration contributors honor agree-upon conventions. Depending on the scenario, your group collaboration can become one or the other of the above. Alternately, a session can also rest somewhere in the middle of the axis of structure and freedom.

When visualizing together, contributing new elements to a virtual space must take into consideration existing elements to build upon them. The relation between existing and new elements binds their creators. Verbal exchanges are quite different. In an extreme case of an exchange between opposing parties, their discussion or indeed argument can be reduced to conflicting statements with nothing in common. Both sides’ arguments can resonate without them having to have anything in common. This is not the case with visuals.  A conflicted visual would not be seen as a new contribution but an act of obscuring or damaging existing representations. Much often it is the case that ideas start to co-exist side by side in an attempt at collective improvisation during a visual jam, inviting participants to outdo others with their ad-hoc sketched ideas. The vigor of unmoderated sessions might be, by this comparison, a little similar to Bing Crosby jammin’ the beat.

What subjectively is useful and makes sense to you needs to be understood by others. Crossing this bridge is a third problem to tackle — once bound and aligned, we need to find a way to understand each other. This essentially comes down to others understanding the contents of our thoughts to ‘get you’ or ‘get your idea’. Suffice to say that mere fiddling with this idea has been the inspiration for countless books and movies. But as fun as said fiddling may be, in the realm of business communication, it is crucial to have a solution, because without the group understanding one’s thinking, no cooperation can take place.

Here’s a thought experiment:  you’ve landed on Mars, and to your surprise you’ve also stumbled upon Martians. Amazed at their existence, you’d need some help from your team on Earth to get in terms of understanding their metabolism, as you’re likely not an expert in extraterrestrial life forms. But any type of communication between you and the team on Earth would hit two barriers — the Earth team would need to be able to understand what you meant when you spoke of these Mars inhabitants, and, similarly, you would need to make sense of what they explained on the science of metabolisms in order to make practical use of that knowledge.

If the discussion were to take place on a whiteboard in such circumstances, it would be impossible to have a conversation without long, reflection-stimulating pauses due to the time it takes for messages to travel between Earth and Mars. Thus, your visual conversation would look like comic book page building done in turns: you add your content, the Earth team receives it, makes sense of it, and sends responses back with their comments and questions.

The first thing you would need to do is introduce a Martian. A picture would likely be the best way to do that as it is a material representation of a real object, so the team back home would be able to go through the same cognitive processing you did when meeting the Martian in person. We call this “first-order representation”. To discuss the Martian’s metabolism, you would probably annotate the picture to point to the location of, say, its nostrils. However, since the notion of breathing is familiar to both you and the team at home, you could describe the body parts using regular language with arrows pointing to the exact locations. These descriptions would constitute “second-order representations” that build on preexisting (and shared) meanings of words and symbols. Your annotations would not make sense to the Martian at first glance, but they are perfectly clear on Earth given that your team speaks English. It is therefore easy for you to communicate the question “How can this extraterrestrial live inhaling carbon dioxide?

This silly, exaggerated example illustrates how our existing, structured knowledge of language, symbols and phenomena can be intertwined to discuss entirely new and abstract issues — with an annotated picture. In a real-life, first and second-order representations are combined much more subtly. In my example, the Earth science team would probably provide the astronaut on Mars with information combined in a way that would best build on his preexisting knowledge. The difference between less and more abstract representations would not be so striking. The point is that clarity can only be obtained if one is aware of a recipient’s starting point in order to “meet them where they are”. Bridging the gap between what you know and what the group knows is essential for getting on the same page. Regardless of methods of bridging that gap, one needs to start with a recognition of the difference between the individual’s and the group’s understanding. If it is stark — as with the martian example — first-order representations might be a good starting point. You can  later begin to call the alien “Marty”, once your team becomes familiar with who Marty is. The name would then constitute a higher-order representation built on the knowledge you helped them to acquire.

To sum it all

In the act of communication, representing something using a likeness is different than calling a thing by its name. Words are arbitrary signs, visuals are “meant to be thing-like” to express what they stand for in a more „fluid” way. These visuals can be interpreted in a range of ways, and sometimes, not at all. This fluid state of the visuals is possible because of the multitude of ways they can be received. Drawings, sketches or resemblances are by nature generalized, displaying some characteristics of the item in question and, at the same time, missing others. Deciphering the meaning must involve empathy. What elements of the representation are of importance to other people? What meaning do those characteristics convey? This, ladies and gentlemen, is the binding power of visuals.

Team discussion and visual contributions on a whiteboard canvas are often facilitated to some degree, yet it’s possible for the control to be loosened so the encounter becomes less directed and much more open for improvisation.  Even in unrestricted brainstorming sessions with visual improvisation, a set of ad-hoc rules is usually spontaneously instituted for participants to remain collective. Keeping the goal in sight is possible since visuals are great for reducing essential ideas to their bare skeletons. By compressing large amount of information into a compact items without losing too much information in the process visuals are crucial for the alignment.

Deeper understanding is possible if the act of spawning and using representations continues as a dialogue. In such an exchange, what you know is represented on the canvas and validated with different perspectives brought in by other participants. The whiteboard can become a space to share concepts and agree on their meanings. The end result, built by similarities, creates understanding. And understanding founded on differences is, in the end, the most precious kind that can be attained.