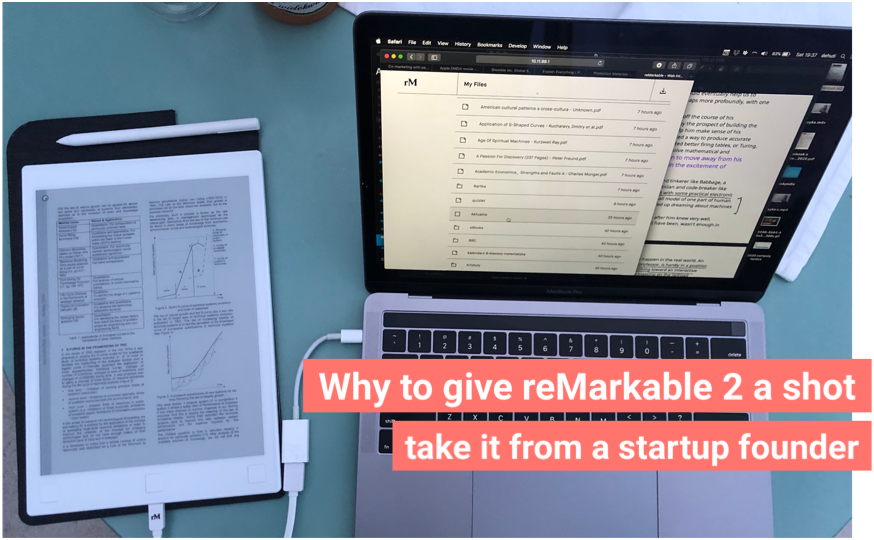 The world held its breath awaiting the arrival of the new paper computer that is thinner than 49 sheets of paper 1. The buzz a small Norwegian company managed to generate around their electronic notebook-replacement device called reMarkable 2 seems bizarre — why should we get so excited about yet another e-paper reader? The device’s arrival was also postponed several times, though some pre-production units were reviewed by 20 independent journalists whose opinions were, shall we say, mixed.

In short, despite the device being great on the outside, there are some significant shortcomings inside. reMarkable 2 is actually a very limited reader that is surprisingly slower than the previous generation 2.

A lot has been said about the reason for this — why would a device that so many have put their heart and trust in have so many shortcomings? And what can be done about it? As one of the frustrated customers, I tried to contact the producer unsuccessfully (as many of you did as well), and I almost ended up canceling my order. However, being a startup owner myself, I perceive the shortcomings of reMarkable 2 from the perspective of how a young company needs to strategize to stay afloat. Here are my insights on why, from the vantage point of a startup founder working in the paper replacement space as reMarkable does.

reMarkable eReader flaws are the hidden cost of their survival

Every startup needs to prioritize where to use its resources. reMarkable would not survive in the crowded ebook reader space merely by bringing yet another device into it. Their idea is to stand out by taking the paper experience digital — a territory yet unclaimed by anyone to date. In other words, their strategy makes much more sense if you consider what it takes to grab any meaningful market share. Paper experience innovation requires both hardware and software. When it comes to reader experience, the hardware game is all but over, as readers will ultimately simply continue to use existing e-paper technology. And that’s why the only way to differentiate is either with a less important form factor or software experience. From early reviews, we see that reMarkable indeed nailed the form factor with their new revisions. Good! Fixing a tablet that’s already been shipped is not an option, but this logic doesn’t apply to software features — here, features that are lacking may already be on programmers’ and designers’ to-do lists to be dealt with during future updates. Don’t be fooled by marketing language plays, think strategy. Phrases like “carefully selected features to help you avoid distraction” basically translate to “limited resources that need to be invested in the right order”, lest the company fly too close to the sun and come crashing down. Software is easy to update. Things would be much worse if they gave you a flawed device with great ebook features.

reMarkable’s awkward connectivity is justified from an investment perspective

ReMarkable as a company received $24M total investments in two rounds over the last 7 years. Having spent a similar amount of money on a software-only startup, I can relate, and I can tell you two more things, too. Firstly: that’s not much for even a software-focused startup, yet they are in the consumer electronics business. Secondly: investments come with obligations. The business model built on an assumption of a one-off ebook would not have looked very attractive back in 2015 when reMarkable got their seed round. Clues about what their long-term strategy is can be found in their cloud functionalities and related parts of the user agreement. The exchange of files using their cloud is marketed as a way to provide simplicity (which it does), but at the same, it time binds you to the service with terms clearly articulating reMarkable’s right to upsell you on storage, or even put a price tag on existing features. I presume this was a crucial part of their monetization strategy, and I think it worked just fine to get investment done. Regardless of whether you like the idea or not, their success in clinching the investment got you a device that would simply not exist without the support of venture capitalists. This also explains why reMarkable doesn’t work as a drive to easily put files on. They want you as a cloud user because they need to report your activity in order to build a base to upsell to. Personally, I think we’re lucky to have so-called “beta cable access”, which though limited, works and can be used by anyone that is at war with subscription services of any kind.

Any missing feature that you’re familiar with from other products and would expect is easier than doing things anew, just as copying and pasting is faster than writing your own lines. reMarkable took a bold stand by tackling the hard parts both first and by themselves, and leaving the easy stuff for later. Reading the many frustrated comments accusing the company of laziness, I see that this can be somewhat hard to grasp. Having walked in reMarkable’s shoes, however, I actually appreciate their approach.

Once upon a time, my own company grappled with the challenge of making pen strokes look and feel natural. Eventually, we worked out the problems of latency, precision and natural-feeling pen strokes in our software product — Explain Everything Interactive Whiteboard. For the first 2-3 years, we opted for existing frameworks for digitizing handwriting. Despite this approach being quick to implement, the results were…unsatisfying. In the end, we had to take the long road and write our own framework. Thanks to this experience, I know what reMarkable is going through. It takes PhDs in math and computer graphics to get things like this right. Don’t believe me? Consider this: to reduce lags, points that are captured by a device’s screen need to be “guessed” so your strokes can be displayed right under the tip of the pen. For fast strokes, the code needs to actually predict the curves in each situation where the digitizer wasn’t able to provide you with enough data points because your hand moved too quickly. Add to this pressure sensitivity, texturing to make vectors looks like different degrees of pencil tip softness…I think you get the picture. As you can see, all this is hard, damn hard even, yet reMarkable actually managed to do it on hardware inferior to iOS and Android tablets. They deserve a world of credit for their willingness to tackle a challenge as big as handwriting, there’s no two ways about it.

They’ve already succeeded (to some degree at least)

Changing habits and adopting new routing in handling notes is no trivial thing. Yet reMarkable does an amazingly good job at it. Even my mother, who is 70 years old, successfully onboarded their product in 2 days. What they offer is a well thought-out process of hand-holding the users to adopt new habits. The quality of their onboarding precedes the quality of software, which is a different take on the problem. At our company, Explain Everything, we worked first on creating an amazing whiteboard experience, only addressing onboarding later on. Broad functionality makes the learning curve steeper which in result makes preparation of a great onboarding experience harder for an existing sophisticated product. It is easier to do it order way around and from that perspective, I truly believe that reMarkable’s call to do the onboarding first is a good choice.

Yes, reMarkable is not ideal, but I believe they have the potential to be if we just give them the chance. Yes, the shipments are delayed, but regardless of the reason, I urge you to not cancel your order — I’m more than certain their team would appreciate just a bit more of your patience. I’ve been seeing many voices blaming reMarkable for their unresponsiveness, and I can relate here, too. At Explain Everything, we’ve always valued responding to incoming inquiries in a timely manner. But with Covid-19, the sudden surge in demand for collaborative whiteboards flooded our system to the point that some emails waited 12 days for a response. Our team of 4 support agents needed to be supported by an additional 8 members to stay afloat! At reMarkable, that would account for their entire team, if the numbers Techcrunch numbers are correct. We’ve learned valuable lessons about what suddenly finding yourself in the spotlight means, and I can only assume reMarkable are now learning theirs. Going easy on them and not withdrawing your order can be a token of respect for their team and an expression of our faith in the product. Their paid in full pre-orders indicate that it is your money that is being used to put the final touches on the product. Supporting them in this crucial stage is easy — vote with your money and respect the risks they had to take and the bets they had to make along the way. Starting a company is hard. It takes a lot of courage, there are countless pitfalls along the way. The reMarkable paper tablet is indeed far from perfect. But as the problems are software-related and therefore patchable, a bit of respect and support from early adopters might be all the company needs for reMarkable to become what we all want it to be.